WHAT IS A CONDENSING UNIT?

A condensing unit is a temperature-control device that compresses a gas known as a refrigerant from its gas state to a liquid state by moving it through a system of condenser coils to achieve the intended cooling effect. Condensing units can be found in refrigerators, heat pumps, chillers, etc.

A condensing unit is usually located on the outside and works as a heat exchanger by converting the gas refrigerant to the liquid state. The resulting heat from this will be transferred to the condenser coolant. A heat pump in the refrigeration cycle transfers heat from a high-temperature heat source to a high temperature one. Compressors in an air conditioner are used to cause pressure changes thus leading to the refrigerant being pumped around. This occurs due to the evaporation and condensation that happens e.g. in cooler refrigeration units.

In the condenser, cooling happens when the gas refrigerant is compressed and passed through a heat exchange coil thus converting it into liquid and emitting the heat from the indoor area. There is a fan that blows outside air into the condenser’s heat exchange thus cooling it.

The 2-stage condensing units at CAS GYW offer very high operating efficiency. During their off-peak times, when they are not in high usage, 2-stage condensing units operate in approximately 70% capacity thereby being more cost-effective. During the peak load times, these units will go into high-level cycles to maintain the temperature set-point. The units are able to access and use high-tonnage in periods of very high demand.

This applies to the cooling principle that has been described above.

This type of condensing unit uses water instead of air to aid in cooling. It works by removing heat from the refrigerant vapor and passing it on to the water running through the tube. 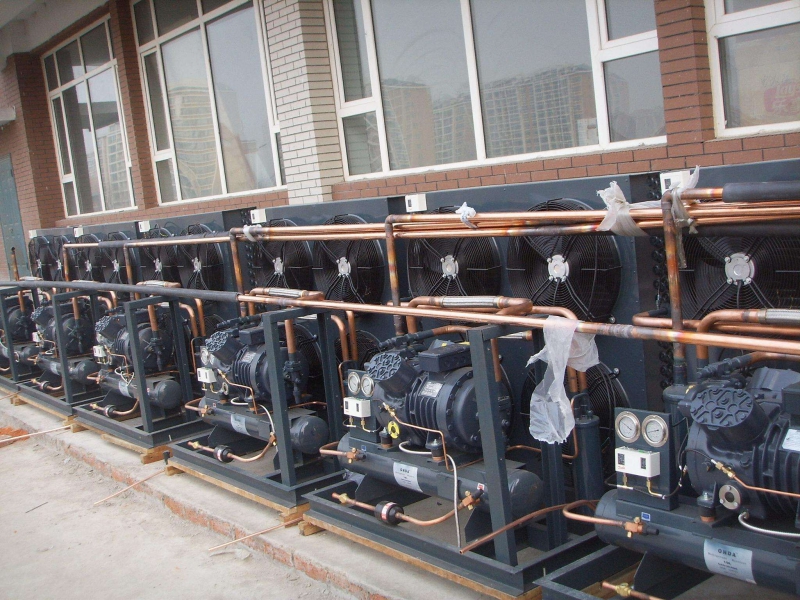 Considerations to make when purchasing a condensing Unit

The majority of condensing units are based on metals plates whose sizes vary and are therefore not always standard; also, different compressor families have different heights. It is important to keep this in mind so that you choose the condensing unit that will fit the available space.

II. The capacity of the Condensing Unit

This is designed according to the intended purpose of the device. Therefore, select a condensing unit according to the ability of your compressor; which is also dependent on the operation point e.g. temperature, condensation, and evaporation.

It is important to select the condensing unit with respect to the application of which it was intended so that it can function effectively.

It is important to pay attention to the power supply in which you will be using the condensing unit. Select one that uses an equivalent voltage and frequency as the power supply.

Also, take into consideration the starting torque. For example for systems that use the expansion valve instead of a capillary tube, make sure that the compressor in the condensing unit has a high starting torque.

Condensing units have a wide range of applications not on commercially in industrial processes such as distillation and in systems such as heat power plants; but they are also used domestically e.g. in refrigerators and are as such part of day-to-day operations. It is therefore important to choose them carefully and to go for the best.

As a refrigeration unit manufacturer, our condensing units meet the best industry practices and practices.